Welcome to Free Range Faeries ~ NEW BOOK Maple and the Crystal Cavern OUT NOW!~ You can visit my real shop The Ivy Cavern, Market Vaults, Scarborough, YO11 1EU

My New Children's Book ~ Maple and the Crystal Cavern 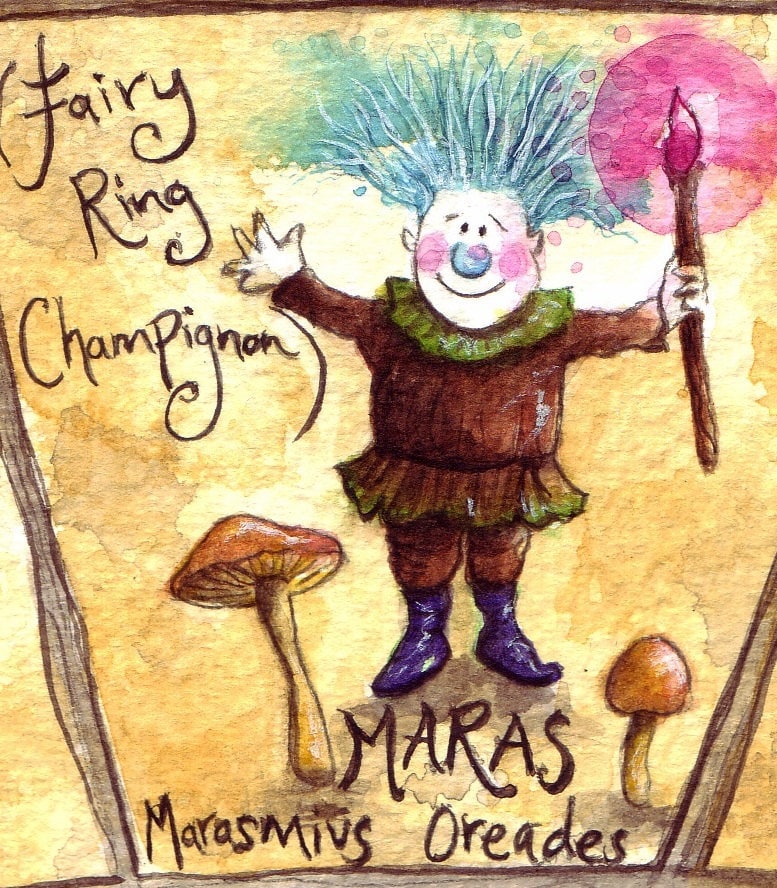 I've just written and currently in the process of illustrating my first children's book 'Maple and the Crystal Cavern'  It's a magical adventure story about a young Faekie called Maple Syrup who lives in the middle of a giant rubbish dump 'FaekieLand' in the  story Maple meets some magical creatures called 'The Mycelies' who are fungus gnomes. I based the Mycelies on the magical properties of the  Mycorrhizal network or 'Wood Wide Web'  I was so fasinated by this amazing process going on right beneath our feet, like a natural version of the internet and thought it would make a great children's story.

An unillustrated version of the book is already available on Kindle as I wanted to get it out as soon as possible as it could take me a long time to finish all the illustrations. I've already done quite afew and plan to spend the winter months working on the rest.

Here's a few of the finished illustrations and also a little bit more about the magical properties and uses of mycelium that I found out while reserching the book. 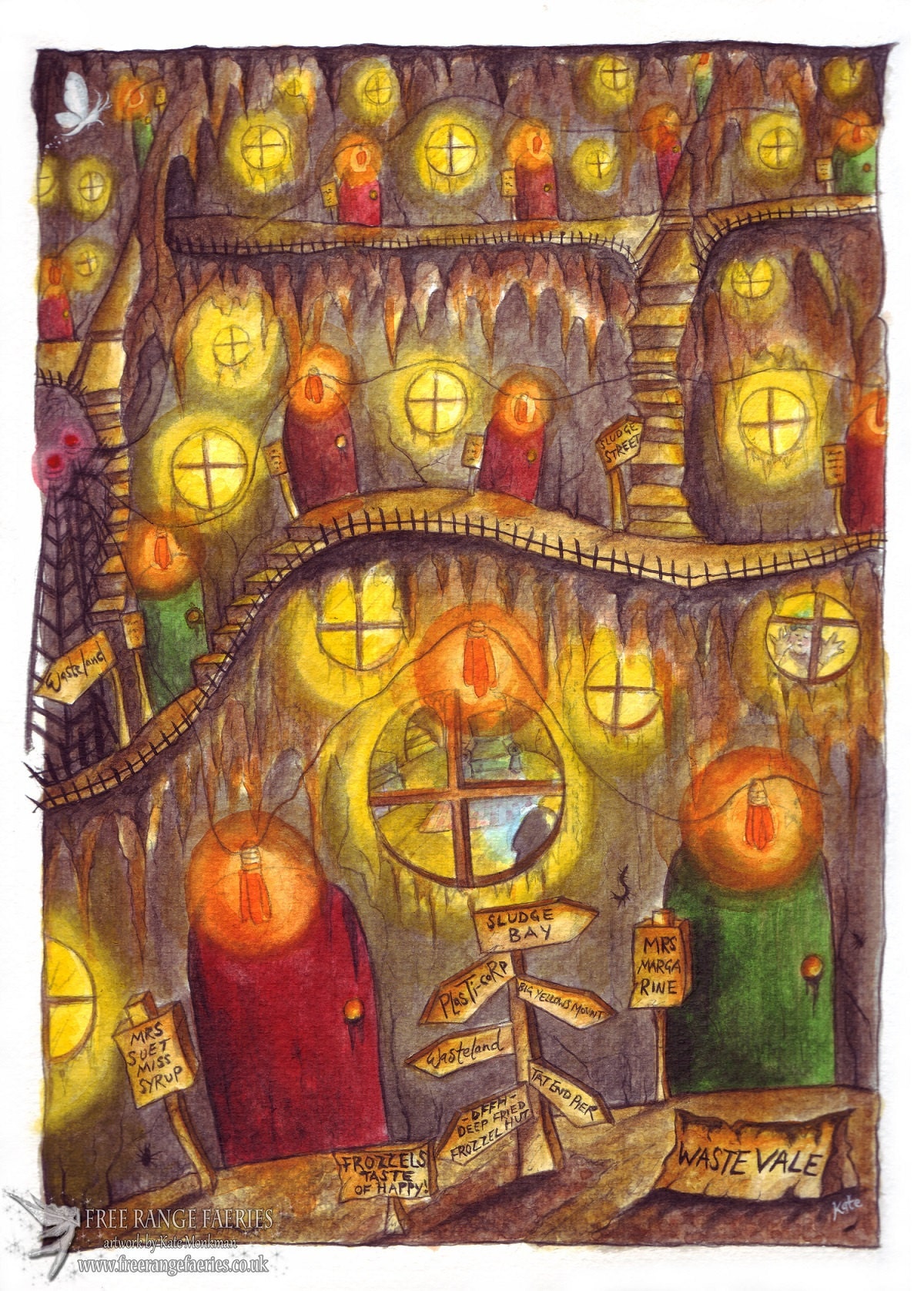 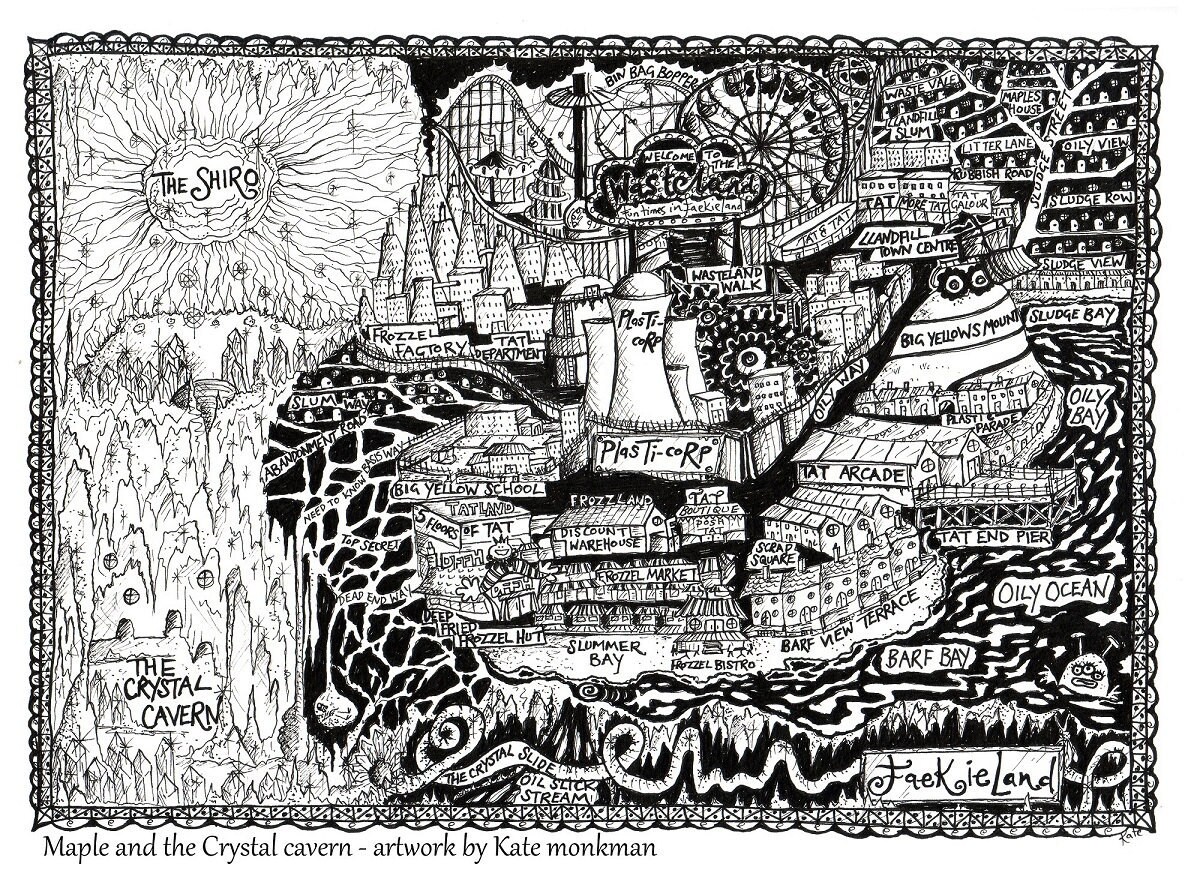 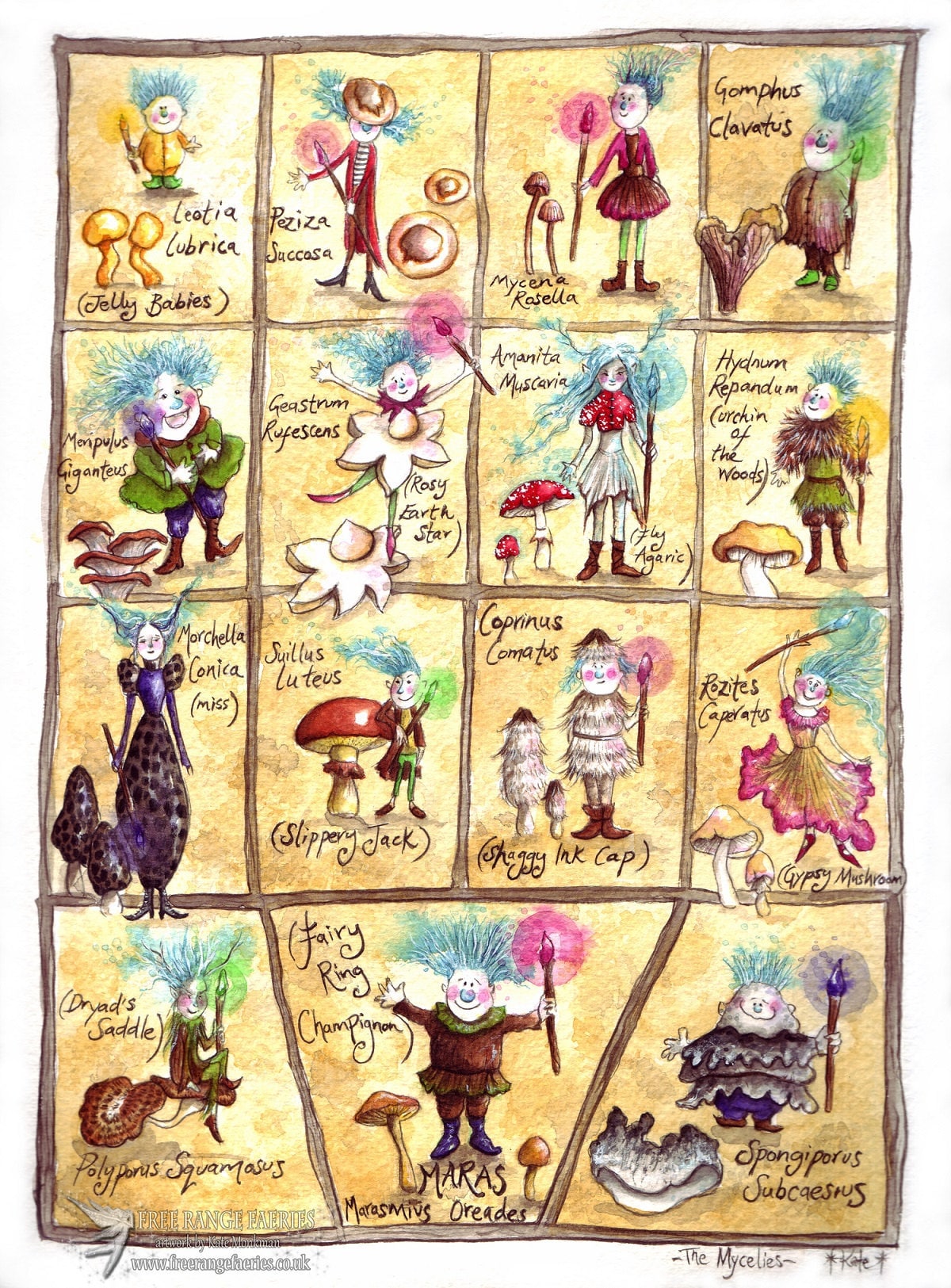 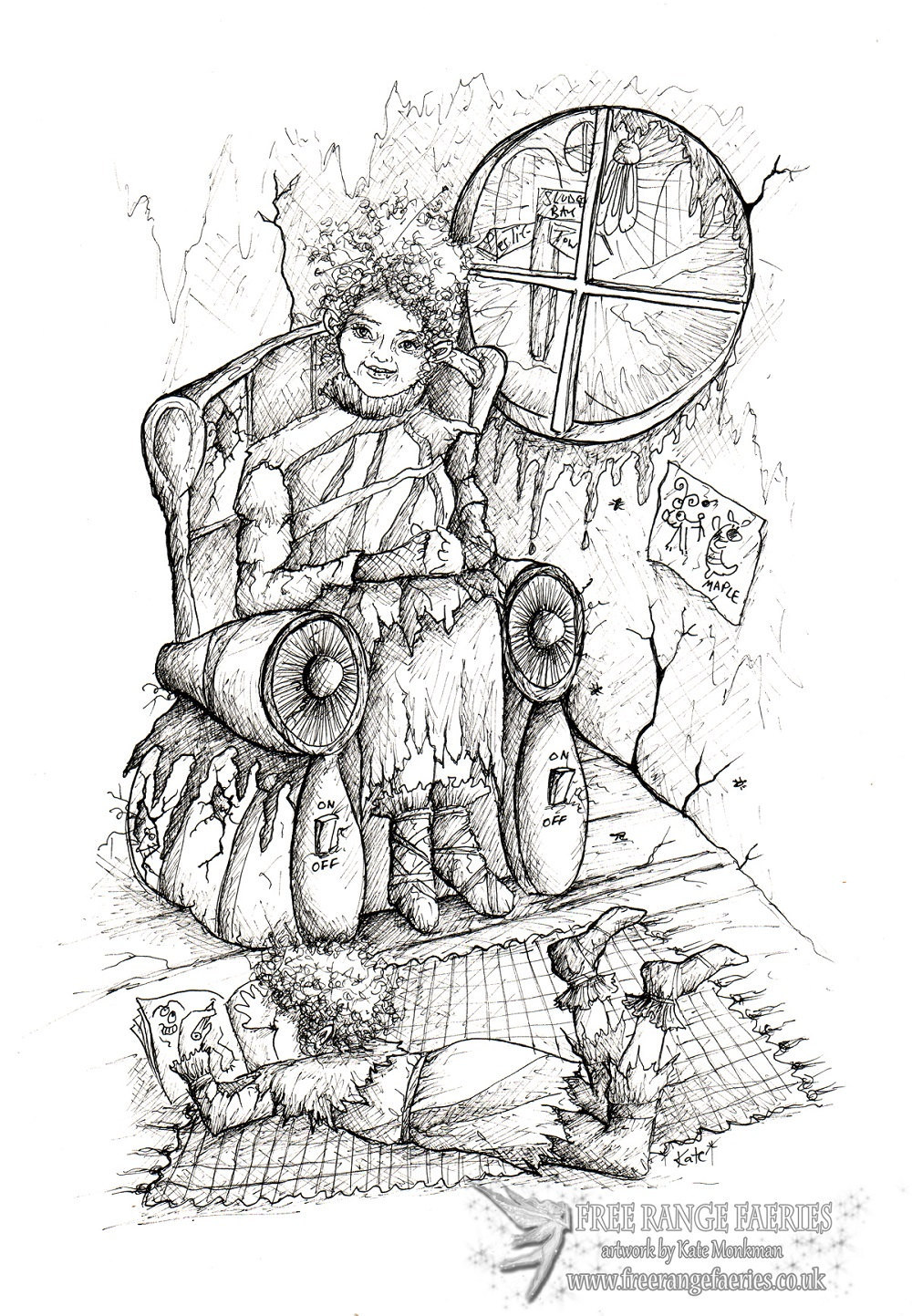 Natures Magic- Mycelium -A little bit about this wonderful stuff!

Mycelium is the vegetative part of a fungus, (or fungus-like bacterial colony). It consists of a mass ofbranching thread-like strands. This mass is sometimes called ‘Shiro’, especially within the fairy ring fungi.A  mushroom is just the fruiting body of a much larger network of mycelium  threads, rather like the way an apple is just the fruit of a much  larger organism, a tree. This network of mycelium is known as the  mycorrhizal network, or ‘Wood Wide Web', as it acts rather like the  internet of the forest, connecting individual plants and trees together  to transfer water, carbon, nitrogen and other nutrients and minerals. In  this way Fungi are the caretakers of the forest, disassembling matter  from waste and fallen trees, and creating fresh new soil. In fact, Fungi  were the first colonizers of the planet one billion years before the  introduction of plants, where they thrived in vast mushroom forests.  Since then they have adapted and evolved, becoming the planet’s most  adept stewards. Possibly the largest organism alive in  the world today is a web of mycelium fungus. It stretches across 2,400-  acres of forest in eastern Oregon in the USA...that’s as big as 1,665  football fields! It’s estimated to be 2,200 years old, so it’s also one  of the planet’s oldest living organisms. What’s so  wonderful about mycelium is this miraculous substance has the ability to  help save the planet, and us, by offering a solution to lots of the  world’s problems, from cleaning up oil spills and toxic waste, to  creating packaging that actually improves the soil when it’s thrown  away. Mycelium can even replace plastics, so that in the future it may  be possible to grow all the items we need, from furniture to phone  cases. It can even produce a leather substitute that is stronger, and  softer than deer skin! So in the future we really all could be wearing  mushroom boots!

Before  I wrote the story I was already aware that fungal mycelium recycled and  broke down the waste in a forest/natural environment, but was unsure  about the process in a landfill site. Could fungi even decompose  plastic? Researching further I came across an article called ‘Fungi  & the Plastics Problem’ on a website called radicalmycology.com, and  from this I learnt that fungi could provide a solution to our plastic  problem after all. In the article it explains how plastic pollution is one of the greatest man-made threats facing futuregenerations,  with some plastics taking several thousand years to decompose, all the  while leaching toxic compounds which have a devastating effect on plant  and animal life.Worryingly, humans have now discarded so much  plastic that every ocean has a vast “trash island” where sea currents  cause plastic waste to accumulate in huge quantities. It is then broken  down into smaller and smaller pieces until it becomes a toxic plastic  soup, up to several meters deep. Fish swimming through these cesspools  confuse plastic fragments for plankton, sea turtles confuse plastic bags  for jelly fish, and sea birds feed their babies brightly coloured  plastic lids, thinking they are small fish. One of the largest of these  plastic soups is in the Northern Pacific Ocean known as the Great  Pacific Gyre. It is estimated to cover an area the size of Texas, with a  depth of 10 meters! So far the only real option to the  plastic problem we are facing has been recycling. However, this comes  with its own issues as certain plastics are unable to be recycled, and  the ones that can be, require careful sorting. This costs a lot of  money, and the recycled plastic produced is often inferior, with lower  economic value. Even “biodegradable” plastics are not always as  “biodegradable” as you would imagine.

Can fungi provide a possible answer?

It’s  been known since plastics were first invented, and tests were carried  out to determine longevity, that they were susceptible to fungi and  bacteria degradation, But the problem with plastic is the length of time  they take to degrade, and the toxic substances they leach out in the  process. Scientists are now working on a manmade compound, using the  digestive enzymes fungi produce. This liquid enzyme could be applied  directly to the plastic waste to begin the process of degradation much  faster, and help clear up the toxins produced. The fungus can even be  trained to eat a particular type of plastic. It’s still in its early  stages, but the results look promising. This really  would be fantastic if we could begin to clear up the mess we have made.  However, what I’m really excited about is a future without plastics,  made possible by mycelium. A future where we can grow the products we  need, and any waste we do make would actually improve the earth, not  destroy it. The main reasons I wrote Maple and the Crystal Cavern was because I was so amazed by all thewonderful  information that I had learnt about mycelium. But I’m by no way an  expert, and have only really begun to discover all its possibilities. So  please research for yourselves, by visiting sites like radical mycology  and looking up the amazing work of the mycologist Paul Stamets, and  companies working on mycelium packaging and furniture, such as  Ecovative.